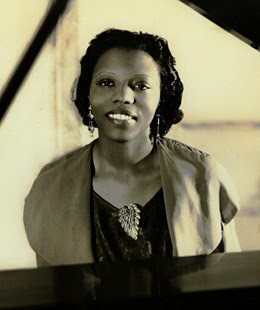 The men loom so large in jazz
Sometimes we forget the women
And sometimes we never knew
But there she was, all along

Mama told her, sitting there on her lap
One day, Mary Lou’s baby fingers
Beat her to it

Must’ve been so good
Mary Lou recalled, that Mama
Ran out the door to get the neighbors

Wasn’t long ‘fore folks
Asked if she could play it
Play that piano, play it for ‘em

Mama knew she had something
Was able to recognize the gift
Soon she had the professional musicians
Coming by the house daily, on shifts
To teach little Mary Lou how to play

Mama didn’t believe you learned
Jazz from a book
From a piano teacher, no
Listening to real jazz players
That’s what it took
The Andy Kirt Band taught her everything she knew
‘Cause living and working with real musicians
Who were living and styling, making and living
That’s how jazz grew

She was there, way back in the beginning
In the early days of jazz, young and gifted
Her fingers flew, those same fingers that lighted
On her Mama’s old-fashioned organ, those fingers
Traveled ‘cross keys, making sounds
Making the rounds, laying down the architecture of jazz
Its texture, its life, no lecture could convey

She was professional since she was six years old
Playing with the jazz men, who held her on their laps
Those little fingers flew and knew, something was on tap
The gift of God, gift of spirit coming through

But boy how those little fingers flew

By twelve she’d played for captains of industry
Given private concerts for pay
Mary Lou’s music took her from the brownstones of Pittsburgh
To the shores of San Francisco bay, to Paris and back again

The Duke, Benny Carter, Benny Goodman, and all the rest
Bought her songs, had her arrange their most famous scores
She was the most sought after songwriter, and Benny wanted more
Hey Mary Lou, why don’t you come work for me?
Write my songs; it won’t take long. I’m paying.

But Mary Lou didn’t equivocate, flattered though she was
But you see her gift couldn’t wait, couldn’t be held
Even by the master himself, “No” she said
“Benny I gotta work for myself”

And work she did, through seven decades in every genre of jazz
Through the flush, through the fads
Mary was composing, arranging, producing, performing and teaching
Her prolific art was unbound, always reaching into the now
Not looking back, but bringing forward all that the music could hold
Bringing it into the present the old, and the new again

And later when she stopped playing
During her Catholic conversion, her struggles
With where her old friends had gone, chasing that song
Mary Lou held on praying, building her faith

But that music, called her back again
She came back to the gift, and when
The music moved on in the sixties
And it seemed like jazz had been left behind
Mary Lou didn’t give it no mind, the world needed peace and love
It was the 60s and Mary Lou got on with it
Fusion, faith, sacred, secular, whatever you may

This time Mary Lou and her music was here to stay
And stayed with it she did through to the end
Historians, foundations, the media, and the fans
All welcomed her back, and she was prolific and as always
Loving, humble, terrific

Mary Lou Williams
A woman of few peers
In the history of jazz
Hard to categorize
Hard to temporize, her reach has been so
Wide, so far

Born in 1910; who knew way back then
That Mary Lou’s life, her music over decades
Would parallel the music, the arc of jazz
From Louis Armstrong, who first saw her play in Harlem
To swing, bop, avant-garde, and more

She was there in the beginning, and foretold what was in
Store, full steam ahead then back again to those chants
In the fields, slave songs

Like that right foot that kept beat
The music was still strong
Still complete, even in her last days
When all she could do was move her feet
That direct line was still there
And she still had something to say

Genius like this doesn’t come every day
And she knew and took care
Kept the legacy, wrote hymns to peace
Moved jazz into the sacred space
And the sacred into the streets
Mary Lou saw no limits to love, to generosity

Her legacy is in the musicians she mentored
Monk, Dizzy, and Charlie Parker
In her humanitarian aid to fellow musicians
To the youth she educated, the time she
Spent as an artist-in-residence at Duke University
Until her death in 1981, honored now

Her legacy lives on in so many places, in the spaces
She created for this, her greatest gift to God
Her archived works tells the story. It is her glory,
The Mary Lou Williams Collection, The Institute of Jazz Studies
at Rutgers University; and the foundation in her name

While she didn’t seek fame; she created a legacy
From The Center for the Studies of Black Culture at Duke University
Tributes at Lincoln Center and the annual concert at the Kennedy
There is a renaissance, resurgence in this great woman of jazz
The little girl that made neighbors come take a listen
Captains of industry pay, black folks saving hard-earned money
In the depression to hear her play

Just a 'lil gal but she was jamming with the older men
Her feet tapping the pedal, fingers knowing just when
Filling the movement and the beat
Always one step ahead of ecstatic feet
This music she knew, from those old slave spirituals to blues
This music she knew, from slave ship to broken shore
From a dream deferred to expressions of evermore
Of freedom, neither black nor white

Jazz from this soil, jazz that changed the world
That’s right, and how couldn’t you adore what she could do with it
These are the days, we remember
The timber and sway, of the music,
Mary Lou’s Mass for Peace

What’s past, is forever present
Give thanks, Mary Lou Williams’ music
Her gift keeps giving; it is eternal and forever