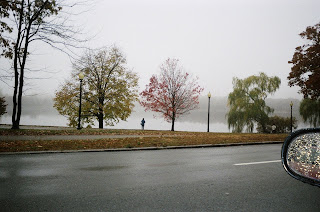 He drives by, the tint and bulletproof
Blocking out the din and laughter of the untaught
He is gifted in the knowledge that he is special, apart
But he is troubled by the bomb, and the stars

They hope for what they don’t have and
Have more than they need
Food, house, loans
Children, not too many of these
Fore they too are children in their way

Life is like a playground after all,
Where the adults work
Hard so they can play, and buy

He buys too, but he can afford it

He drives by, no bullets tonight
Just words and thoughts
The future has become the present
Different than what he expected
And what he expects is good, superior

He hears them inside, their restaurant specials
Not so special, “But still, I must say…
What she wore, and what he said,
Stupid, wasn’t it, funny? Tragic, Yes.
Her fame and the end…Ah…”
Clink, clink.

Lit up and bright, their futures
Only in dark memory, despair
In private, they are public heroes
In public, they are gossips
Only he is the witness:

“Our world is good, our world!”

But there will always be some left behind
He figures, to pick up the pieces and to plan

And the restaurants once empty
Will flow, and the building up again
What must continue, continues

Some will reflect, after the bomb
There will be regret and outrage, never again,
Then laughing, planning and dreaming
Scheming, they forget
They become kings again, and queens, princesses

Shopping, acquiring
Sometimes kneeling
But expecting always expecting
There is something better
Out there, in us
After all, it ends

“Yes.” He thinks as he drives by
It ends, he knows
Better, he knows
But better to forget
He drives by, windows up,
Dreaming of stars.
Labels: Poetry